When you first announce you are pregnant, people are more then willing to tell you about the terrible morning sickness they had that lasted for months.  Thank you for the well wishes Mr. and Mrs. Stranger.

Then as you get bigger, the general public views you as a Good Luck Buddah who is just dying to have it's belly rubbed and more people start telling you about the horrible fifty-seven hour long labor they went through.  Thanks for that Mrs. Inappropriate Timing.

Of course, when the little one makes it's grand entrance you think that all of the random stranger comments will cease...and then you go to the grocery store for the first time with your new baby and run into that crazy old lady that feels like she has every right to touch your child's face and hands.  Uhhh, not so fast Mrs. Germ Spreading Granny.

The list goes on and on about what people will do and say to you when you are prego or have a little baby.    So, why is it that in all of these random ramblings by people I don't know did no one happen to mention one of the scariest (non-life threatening) events that could take place with my toddler?  It's not uncommon, but I'd never heard a thing about them, until after AJ had one and I researched them.

AJ had just turned 2 and the whole family had a very eventful day together.  AJ fell asleep early and had been down for a few hours.  Jasey and I were starting to call it a night, too.  Then out of no where AJ started screaming and crying.  Jasey got there first and said that AJ was standing on his bed staring at the wall screaming his head off.  He would kind of respond to us when we asked him a question, mostly by saying 'No!' and crying harder.  Then he started crying for mommy, so I stepped up and tried to calm him down and asking if he wanted some juice, he yelled 'No!' and then cried for mommy again...'I'm right here kiddo.'

Then we realized that he wasn't looking at us, he was looking past us, right through us.  He was completely glazed over, still screaming and by this time crying so hard that he couldn't breath.  I left him with Jasey and went and got some juice and the phone.  I was half way through dialing my mom, when I hung up and started to call the pediatricians office.  Halfway through that number I realized that it would be at least a half hour before they called me back and I was afraid that he was going to have a seizure or something.  I kept telling myself that he was OK, that he would calm down soon, that we were his parents and we could handle it.  Then I thought that I would never forgive myself if something happened to him and that if I was scared enough to think about it then it wasn't a silly thing to do and I grabbed the phone and started to dial 9-1-1.

I never finished dialing.  Just like that he stopped crying.  He was hiccuping and cuddling with Jasey and was even holding onto his juice cup.  He was responding to our questions with real answers and was looking at us right in the eyes.  I was still a bit in shock but totally relieved that he was OK.  Then the question of 'what in the heck just happened?' crept into our minds.  After settling him in to bed I immediately went downstairs and got on the computer.  I don't even remember what I googled but in the end came up with night terrors.

AJ has had a handful more since then, though none as scary as the first, I guess since I knew what it was this time around.  A few of the shorter ones were actually a bit on the amusing side.  One he was standing at the gate to his room just screaming 'NO!   NO!   NO!' right to my face, I just turned around and walked away.  The latest one he was standing on his headboard, behind his blinds and appeared to be attempting to climb out of his bedroom window.  But, by far, my favorite (is it bad that I have a favorite night terror) was during a nap time one day.  He had been asleep for a little while and I went in to check on him and cover him up.  As I was adjusting him he opened his eyes, reached up and grabbed the hair on the top of my head and started growling 'MOOOMMYYYY, MOOOMMYYY', and then let go and instantly feel back asleep.  It was very creepy, but it gave me a good giggle.

So now you have been forewarned about a scary thing called Night Terrors.  It's along the same lines of sleep walking.  It can happen if your child has missed a nap or is extremely tired.  It usually happens a couple hours after they have fallen asleep, when they are completing one sleep cycle and entering the next, they kind of get stuck between the two.  Do not attempt to wake, talk to or touch them, believe me I know this is hard and goes against all mothering instincts, but doing any of those things can prolong and worsen the situation.  The best things to do is try and make sure they are well rested throughout the day.  Check on them a couple hours after they have gone to sleep, adjust them to kind of make them stir but not wake them up.  If they do have a terror just watch them to make sure they don't hurt themselves since they may thrash or try to climb.

Hopefully if you ever have to deal with night terrors, this will prepare you a little bit and you won't be on the verge of calling 911 like I was!

Now I do realize that this post may bring me into line with the 'people' mentioned in the beginning, but since it was to make you aware of what may come, rather than scaring you poop-less or trying to touch you without your permission, I feel that this was more constructive rather then invasive.
Posted by Andrea at 5:43 PM No comments:

I started following a blog a couple years ago and have since become totally obsessed with it.  Theresa, the woman fronting this blog is awesome!  She has dubbed herself the Green Bag Lady.  A few years back she started making reusable shopping bags for herself, family and friends.  It has since turned into a weekend ritual for a group of ladies (and a few guys) known as the 'bagettes'.  Cute, right?!  When I started following, GBL had given away over 2000 bags, it is now over 10,000, woohoo!!  I checked in everyday to see what was going on and entered a giveaway, and I won bag!!!  Bag number 2945, seen here in AJ's 18 month old grasp  :) 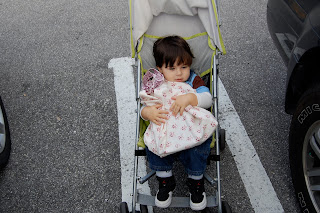 I love to sew and I was very excited once I watched her video on how to make them, it was so easy!  Mom had given me a bunch of old fabric that she had and I immediately started sewing my little heart out, I made so many that I decided to for-go holiday cards and instead gave over 50 bags to family and friends.  Here is a picture of all the bags that got sent out. 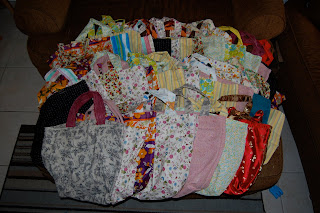 I don't know how Theresa and the bagettes do it because I loved each bag that I made and wanted to keep everyone of them!  Jasey makes fun of me because I do have quite the stash of bags in my car!
I have given away other bags to random people that I meet in the local green market or at the grocery store.  I have also recently given bags to new friends and their families.  My aunt gave out about 10 of them to her music group and I am always making little bags to give gifts in, instead of buying paper gift wrapping of course!  (I now wish that I had taken the time to document each of them, but oh well!)  I also have a bag of bags of all different sizes in my car so that at any given moment I am prepared to share with an unsuspecting passerby!

After winning my bag, I entered a few other freebies and have also entered some friends and family in giveaways for GBL bags.  I have become a GBL junkie!!!  I mean, come on, if I use the term Green Bag Lady so much that I have become accustomed to shortening it to GBL, I think it's safe to say I'm a junkie :)  These are the registered GBL bags, I gathered them all to take a picture, I'll give you a rundown starting from the left.  Ryan is # 8343, Jasey is #9170, AJ is # 9785, Andrea is #2945 and Jackie is # 3169, the blue fabric on the bottom is from the latest giveaway called Sew Mama Sew, where winners also receive a precut bag to sew and share with a friend, I sadly have not yet sewn it, but I will soon and will find the perfect person to pass it on to! 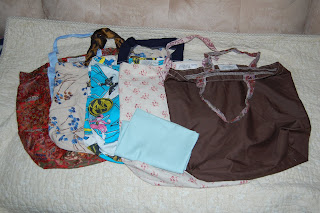 As I mentioned I also entered other freebies, there are four additional bags in the pic below, which are from those freebies.  I won the two bags on the left first, they are produce bags and have little ties to cinch up the bag so your apples don't go rolling around, trying to escape.  The green one actually has a small branch from our last christmas tree in it, which I keep in the car as a potpourri satchel.  The pink one is a gift bag and the last one is a mini-bag made by one of the bagettes with some larger scraps.  See...GBL junkie, thats me.  But wait we aren't done... 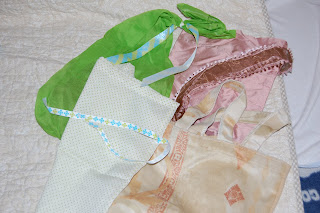 I entered an Earthday giveaway, which I got some of you to also enter (I'm still waiting on pics!)  And because you all are so awesome and mentioned my name, I won a small prize pack!  Here is the fabric that Theresa kindly sent me, I told you she was awesome!!!  The gingham and polka dot fabric is oil cloth, I am using some to top my craft table (a nifty idea from the GBL herself) I will be sure to make a few bags with some of the other material, maybe for a little giveaway myself.  And I'm not sure about the rest...any ideas? 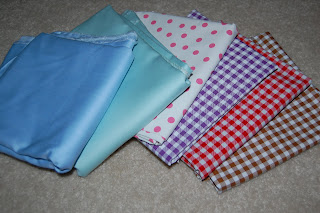 During the Earthday giveaway, Theresa linked all her blog followers over to a whole slew of organic fabric makers that were doing a bit of a giveaway themselves.  I went to each of the 12 participating companies and entered their individual contests.  What do you know, the lovely ladies at Cloud 9 Fabrics picked me and sent me 3 fat quarters of my choice of designs from their Beyond The Sea collection!  Here were my choices...Coral Weed, Sea Urchin and Sandpiper.  They are soft and bright and just oh so lovely! 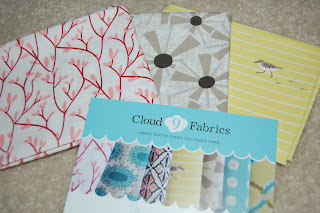 I'm glad I was able to share another of my favorite blogs with you and hope to share more in the future!  Now I have to go get my booty in gear and start sewing some more!

Posted by Andrea at 4:15 PM No comments: