I am not going to go back and check how long it's been since I've posted but we all know it's been a while.  I will give no excuse other than, life happens.  I apologize.  But I'm here now!

I will ease myself back into this blogging thing with an update for the little ruler of the house.  Holy crap Ryan is 4 years old!!!  Her birthday was Monday.  It was a low key day where I mostly reminded AJ a few times that it was Ryan's birthday and to please not annoy her and make her scream.  AJ had a reading group that afternoon at the library so Ryan got to play in the kids section which both of the kids love.  She also wore her new Sofia the First dress up which was a great conversation starter for her so that she could inform everyone that is was in fact her birthday that day.

After reading group we headed to the grocery store, I never made it over the weekend so we had close to nothing in the house.  (I really love it when the fridge and pantry get that low, it makes me feel like I'm using everything and not being wasteful)  But it got so low we were actually out of vegetables and the only fruit we had was a lone apple.
I asked Ryan what she wanted for dinner.
"Muffins" she replied.
"OK, what do you want with your muffins?"
"Apples"
"So you want muffins and apples for dinner?"
"Yes, I love muffins and apples. Cut up apples"
"What else would you like with the muffins and apples? Like chickens or noodles...?"
"Doughnuts!!!"
"Baby we can not have muffins, apples and doughnuts for dinner"
"Can we have doughnuts for breakfast?!" AJ pipes up
"Maybe this weekend, but we still need to figure out what we are going to have for dinner tonight. Ryan what do you want to eat for dinner tonight...and no doughnuts."
"Muffins!"
Ugh...

So, I decided to build a menu around muffins so she would get the one thing that she asked for.  The least I could do.  We shopped for the week and for that night and I got a little ice cream cake for the 4 of us.  It was a little late and I still had to get home and cook so I decided to cut a few corners, like buying pre-made muffins, so the kids wouldn't be eating ice cream cake at 9:30.  Then I got home and realized I didn't get muffins!! Out of every darn thing that I could have forgotten I forgot the most important part of the meal!  Luckily I had a quick just add water mix in the cabinet so I threw those in the oven and 15 minutes later the night was saved.  Who knows if she would have even made a fuss about not having a muffin but it was her birthday and I didn't want to disappoint her, especially after she let the doughnut thing go so easily.

Before we had cake we let her open her birthday gift.  Jasey and I were so excited to give it to her!  We ordered it and put it together about 2 weeks ago and it had been camping out in our closet, so it was nice to gain that space back as well.  A new dollhouse!  She was still playing with a Little People plastic one that she got for her first birthday.  She still enjoyed playing with the little one but it was getting pretty small for her and she played with it so much I knew that a bigger one would not go to waste.   Bonus, it fit perfectly under her bed!  This was where I intended on putting it so I searched for one that would fit.  She said it was 'fabulous!' and immediately set up all of her princesses in it.  A definite hit!  Ice cream cake and a little extra playtime followed and then it was bed time. 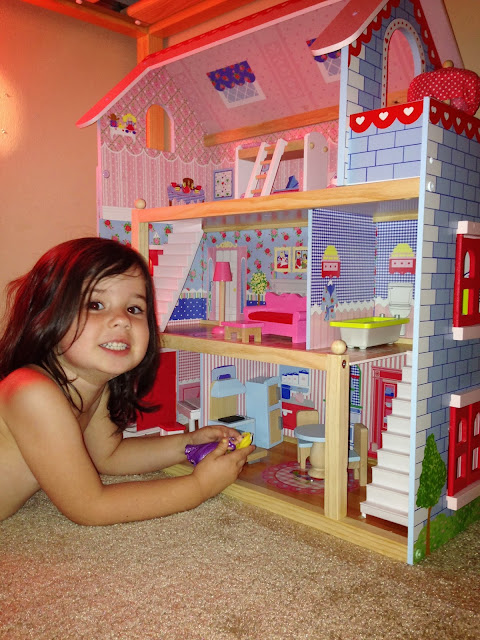 They were both pretty tuckered out by then and bed time was not fought that night.  Though I guess Ryan was still feeling pretty special because she insisted she wear her tiara to bed. 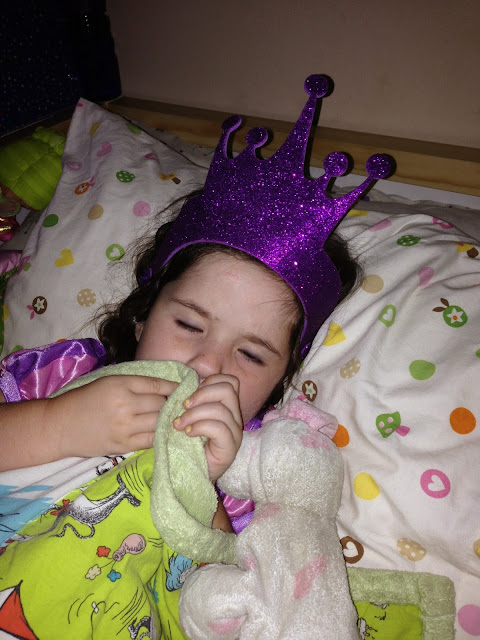 Two days later she had her 4 year check up.  Little miss is 40.5 inches tall (68th percentile) and 36.6 pounds (65th percentile) They also took her BP for the first time.  They tried at 3 year but she couldn't get a proper reading and this time around they had to use the baby cuff because she has tiny arms.  Her BP was 91/58, holy crap I wish my BP was that low.  I actually have a very good BP, but that low would be awesome!!  She got two shots, which she was none to happy about.  I also asked the doc to look at her feet again.  The poor girl was so big that her feet were all squished when I was prego with her (her head was taking up most of the room!) so she's always been kinda pigeon toed.  Her legs (one especially) looked to me like they kinda bowed but that has straightened out.  Her feet on the other hand still turn in.  Her left foot is worse and when she gets tired they start to drag, she trips and sometimes fall.  Everyone kept saying 'oh, they will straighten themselves out' but I've been watching them ever since she was born and since she's started walking and they have yet to correct themselves.  Finally, the doctors agree.  They are giving us a referral to take her to an orthopedist.  So I will keep you posted on that when ever we find something out.

Until then, there is your 4 year update for Ryan, our little ruler.  The shrieking, chunky-butted, chipmunk.


Today I am grateful for cool, Florida mornings.  They make walking before the sun comes up completely worth it.
Posted by Andrea at 10:46 AM No comments: