***Disclaimer - I would just like to point out that I was going to write this post yesterday but seeing as it was AJ's birthday I instead was spending time with him.  Thank You.***

So when AJ was born I of course (being his mommy) thought he was the cutest baby in all the world (rightly so since I'm his mommy).   Here take a look...

So you see what I mean he was totally cute!  I couldn't imagine that he could get any cuter.  How could he with the best smiles and those snackable cheeks.  I loved getting a whole cheek in my mouth and giving him big noisy kisses.  He was so chunky and squeezable.  The best part were his fat little hands, I loved kissing the palms of his hands, so warm and soft.  Pure heaven.

Then before I knew it a whole year was gone.  He crawled and walked, used sign language and said his first words, it was an exciting year.

Any first time mom out there knows that the first year of your first born is the quickest year of your entire life!  When I opened my eyes from that one year long blink this is what I saw!  The cutest baby ever had become the cutest 1 year old toddler in the history of mankind (remember I am his mommy).


Adorable, I know!  By this time I knew that he really was the cutest kid ever and realized I would always have to live with his cuteness.  Would my heart be able to endure the daily melting from his cheesy dimpled grins?  Again another year passed and he was 2, I couldn't believe it.


Two was so fun, we had some 'terrible twos' moments but he was usually more interested in running around and being a rambunctious little boy.  He was certainly figuring out how to be himself.  But that cuteness never went away.

It took me a while to stop thinking of him as a toddler.  But there he was, my 3 year old pre-schooler.


The threes were pretty rough.  He did a lot of things early but when it came to the terrible twos he decided to hold on those for a year and bring them forward with full force in the third year instead.  This was the year that if it wasn't for all that cuteness, I could have wrung his neck more than a few times.

Lucky for me there were no cameras around to catch the neck wringing so we only have evidence of the cute.  (Maybe thats why everyone looks at me funny me as I snort with laughter when they tell me what a good kid he is).

I bet you know whats coming next, but it was sure a slap in the face for me.  My little babycakes is now 4 years old!  And guess what?  He is as cute as ever! 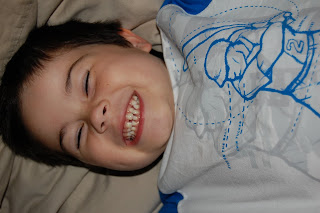 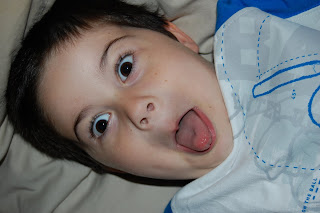 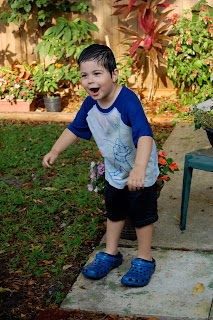 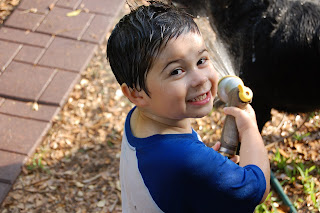 I do know what a good boy AJ is and I am very proud to be his mommy.  He is polite and well behaved and keeps us entertained.  He is a goof ball and, as with all kids, you never know what will come out of his mouth next.  It could be a silly made up pre-schooler word, a song that you have never heard him sing before or a bit of information that leaves you speechless for a moment because you think it's incredible that a 4 year old can retain, understand and communicate something so complex.

He has changed so much but I still get a whole cheek in my mouth and I still give the palms of his chubby hands kisses.  I won't lie and say I don't miss the chubby baby, I would love to hold him in my arms again.  Though, every night that he gives me hugs and kisses before he goes to bed I love him even more and am glad that he is growing up.

I have been going through more and more stages of funkiness.  After the most recent one I realized that I needed to face them instead of saying oh it's no big deal and moving on.  Moving on isn't a horrible thing to do but if I continue to constantly go through spots of dark clouds, one day they are likely to get the better of me and I don't want that to happen.

There is no rhyme nor reason to when I become funky, not that I can tell anyway.  But usually right in the middle of it I realize that it's been going on for at least a few days.  I don't know if it's cued because I noticed it or if I would have started to feel better anyway but once I know I'm being funky I start to come out of it.  It's seems to be on a cycle, like that of a hibernating bear on Planet Mercury.  You know if there were bears hibernating on Mercury.

Follow me here...It takes approximately 88 days (Earth time) for Mercury to go around the Sun.  I'm not going to get super mathy here, I'm more of a number rounder.  Split 88 days into 4 seasons and that gives you about 3 weeks a season.  So that gives me (the bear) 9 weeks to wake from my slumber, sniff some flowers, scare some people and eat some berries before I realize it's time to find another cave to shack up in for the next 3 weeks.

That seems about right.  I will be perfectly fine for a long time.  I am an optimist.  I can find the good in almost anything.  I give people the benefit of the doubt.  I accept what comes my way and do the best I can.  Then I realize I've eaten my last berry, winter snuck up on me and the dark clouds are over head.  So I retreat.  Without a word I go into hiding and just as people are starting to notice that I haven't been around as much, there I am.  All ninja bear-like.  Happy and ready to be me.

It may not be the healthiest way to live life right now...but, considering our life right now I think I'm doing a pretty good job of staying sane.  So there you go.  I am Andrea, an optimist, an Aquarius, a hibernating bear on Mercury.  Awesome.

The other day I was looking over one of Jasey's final exam review packets.  I never did this nor did I look through any of his books while he was in school,  it is all so math based.  Combine that with the facts that I was never thrilled with math and I haven't been in a Math class for longer than I'd like to admit, I always feel a wee bit on the below average side of the scale.  I know this is not true but I don't like the possibility, so I avoided his schoolwork at all costs.

If math is my enemy, then word problems are my nemesis.  I can hold my own in a Math class but as soon as a word problem is presented I break down.  This entire packet was word problems.  I would have failed this class, no question about it.  Jasey on the other hand, he is a numbers guy.  He enjoys stocks and trading.  The financial and strategy ends of business thrill him.  Give him numbers and he will find a way to make them better.

Math is absolute.  I am way too free spirited for absolute.  I was always much happier sitting in an English class.  There were different ways of looking at things.  Not everyone got exactly the same meaning out of literature.  Of course there were some absolutes in english, such as grammar, but even that was subjective at times.  If a poet decides to write in all lower case or to not use punctuation, he was eccentric and had his own style.  There is no wiggle room in math.  If someone in a mathematics field doesn't use the proper formula or puts the parenthesis in the wrong place something might blow up or the moon might fall out of the sky.  Okay, maybe that was a bit dramatic, but you get my point.  I like wiggle room.

As Jasey quickly walked me through the basics of one problem, I could follow and understand but there was too much and I was happy when it was over.  I did not want to dive in and figure out the rest of the packet.  It did not make me want to sign up and take a Math course.  It did however reaffirm my dislike of math.  I can only go s long before my brain hits it's own off switch.  I guess that's one of my own personal defense mechanisms.

I know there will come a day that I will probably need to take a class or two so that I can keep up with the kids and actually be able to help them with homework but today is certainly not that day!

English...definitely more my thing.  I'm not going to sit here and talk about how English is better, that is just a stupid argument.  I just think it's crazy that two people, Jasey and myself, have personalities that are so reflected in the school subjects that they were best at.

Jasey is absolute.  Definite.  Infallible.  Fixed.  Unbending.  He is math.

I am flexible.  Undefined.  Conditional.  Versatile.  Multipurpose.  I am english.

For the most part in the future, I'm sure that Jasey will help the kids with the numbers and math and I will be the one helping with sentence corrections and book reports.  But, that is something that I love about the two of us as individuals and as a couple.  Even though we have those areas that we are better at and have accepted that out partner might be better suited for a certain task, we aren't afraid to step up and do what needs to be done or ask for help and learn to better ourselves.  Maybe math can be a little vague and english at times can be pretty rigid.

- Today, even though it's tough, I'm grateful that I have something I can still be grateful for. -
Posted by Andrea at 11:13 PM No comments: