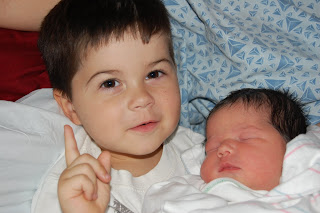 AJ is our little boy, born May 2007, although little never really described him.  He was 9 lb 10.5 oz when he was born and kept growing out of new clothes before we could get them home and take the tags off. 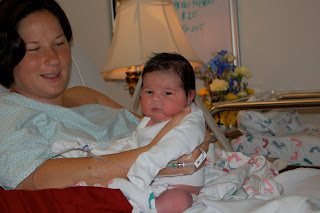 He will be three years old this year, I still can't believe how quickly it's gone.  It's been amazing watching him grow and even more amazing to watch him become a big brother, he loves his little sister.  He has always been the best little guy and so easy going.  We do have our spells of the terrible twos and some temper fits here and there but he knows that they don't get him anywhere and they usually pass pretty quickly.  Mommy and Daddy aren't afraid to ignore him and let him realize he's making a fool of himself.  He picks up and learns new things so quickly and as always it's funny and incredible to hear what comes out of his mouth sometimes! 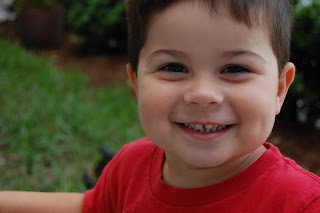 The last picture I took of AJ before Ryan was born

Ryan is the newest addition to our family, born October 2009, she is the 'petite' one, though not by much.  Ryan weighed in at 9 lb 9 oz, a whole ounce and a half less then her brother.  I grow them big. 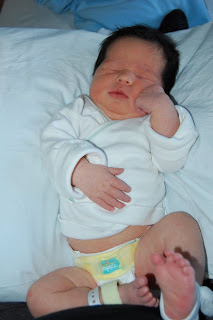 Ryan is only months old, but she has made her place in this family known and if we start to forget she has no problem reminding us.  She will be true to the meaning of her name 'little ruler'.  She talks so much more then AJ ever did at this age and has a smile that makes me giggle no matter what.

Something that caught me off guard is from when we first brought her home, and had a couple days of getting into a routine and keeping up with everything else going on in the house.  I was watching AJ playing by himself, getting up, walking around...it suddenly struck me that he wasn't a toddler anymore, he was a little boy.  I don't know if I noticed it because I now had an infant in the house again or if her being there made him grow up all of a sudden.  It was a crazy thing to suddenly realize and a definite bittersweet moment in my life.  I was so proud of him for being such a big boy and yet so sad that that chapter in his childhood was over.  Though i am grateful to have such a memory of that moment, there are so many other chapters that slip by without you ever realizing it.